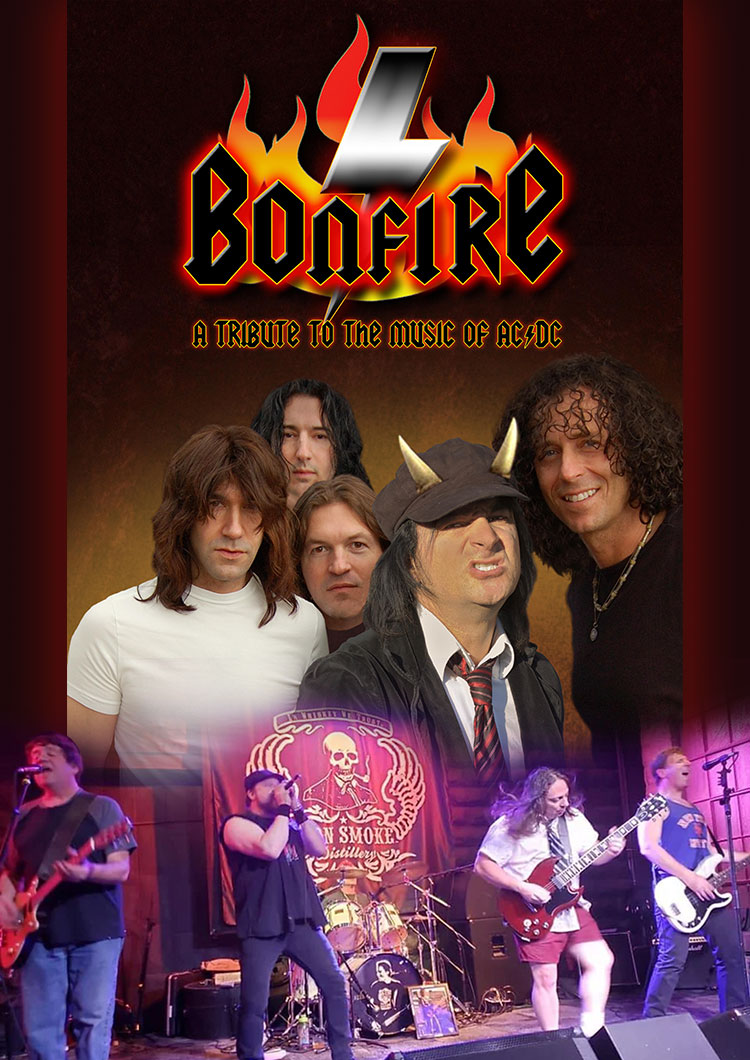 Bonfire is a high-energy tribute band to AC/DC playing the music that many people know and love. We have had great responses to our previous shows due to our musicality and showmanship.

Focus of the Band

We are very focused on recreating the sights and sounds of early AC/DC.

Our "Angus" wears the traditional school boy outfit and mimics the famous moves that make for an energetic and exciting show.

Bonfire has been called the best AC/ DC tribute around by other well known tribute acts such as The Atomic Punks, a tribute to early Van Halen, Steel Panther, an 80’s metal glam comedy show, Led Zepagain, a tribute to Led Zeppelin, Sticky Fingers, a tribute to the Rolling Stones and others.

Largest AC/DC Convention in the World

Bonfire also performed at The Big Ball in North Wales, the largest AC/DC convention in the world, where they were named by the organizers as the best tribute to AC/DC in the 3 years of the event’s running.

Jerry Greenberg, who ran Atlantic records in the 70’s, signed many major acts (ABBA, The Bee Gees, Foreigner, ect.), and who worked with AC/DC, says we are “AS CLOSE AS YOU WILL EVER GET.” New York Times Best Selling Author, Anthony Bozza, who wrote books with Artie Lange, Slash, Tommy Lee & Eminem, coined Bonfire as “THE BEST HE HAS EVER SEEN,” in his new book, “WHY AC/DC MATTERS.”

D. Swagger/Sticky Fingers - A Tribute To The Rolling Stones

Bonfire is the best tribute to AC/DC I have ever seen ....

There is a really awesome AC/DC tribute playing after this. The dude is so much like Bon Scott it's ridiculous.

Did you guys see Bonfire!?"

Saw these guys when on vacation this year and was totally blown away. I was lucky enough to see the original line up in Glasgow, Scotland in 1978 and this show was every bit as good as anything else I have heard.

Bon Scott Reborn. Bon Fire is by far the best AC DC tribute band out there, and I’ve seen a few. They headlined the BIG BALL in Wrexham England and rocked the house down. All AC DC fans need to see this band and see for yourselves the reincarnation of Bon Scott. It will sent shivers down you spine.

These guys are the real deal. They were so impressive, it took the audience and including me two more bands to get over how awesome these guys are. I would see them again, and again! Thanks Guys for the adrenaline rush. And long live Bon Fire!!!