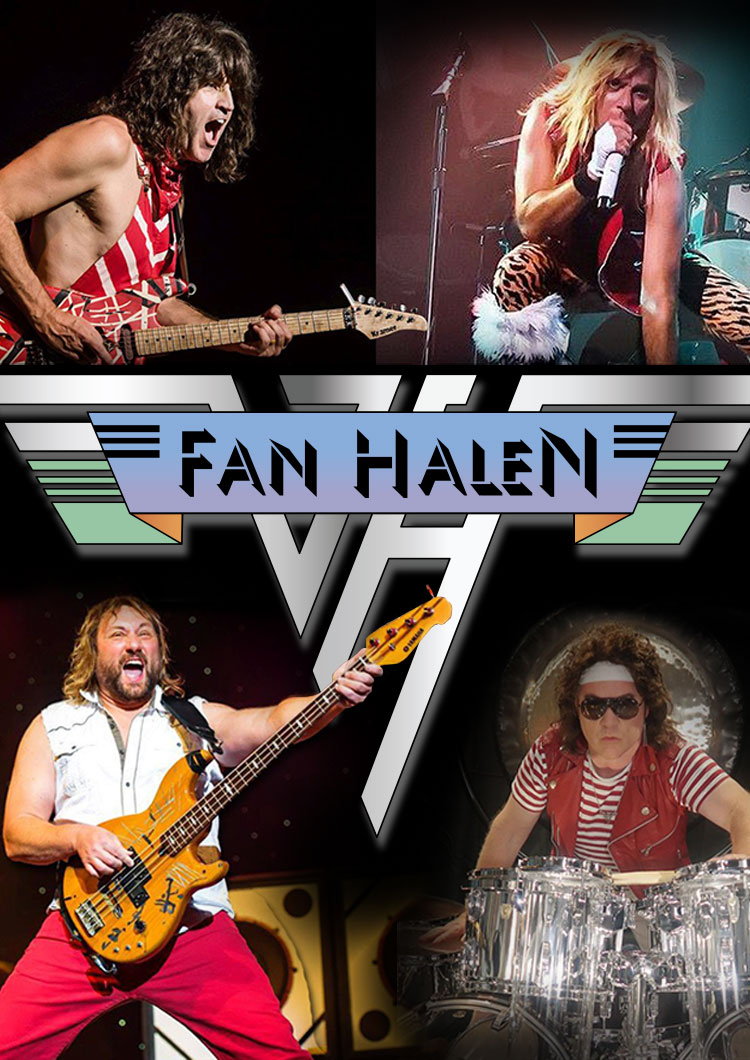 Fan Halen is known as “The World’s Most Authentic Tribute to Van Halen”, FAN HALEN sets the stage for a night with Dave, Eddie, Alex and Michael with a true-to-life tribute to not only the band but the spirit of an era!

Based in Southern California, FAN HALEN has been together for over 10 years playing to enthusiastic crowds all over the US as well as the globe including Japan, South and Central America, Canada and Mexico.

Fan Halen was chosen to perform on "The World's Greatest Tribute Bands" on AXS TV.

No other tribute looks and sounds closer to Van Halen. ~ TributeCity

Ernie Berru as David Lee Roth is so uncanny and convincing it’s got to be witnessed to be believed.  From Diamond Dave’s unmistakable costumes to his signature scream and unique vocal delivery, Ernie delivers the swagger and bravado second only to Roth himself!

Derek Fuller as Edward Van Halen recreates Edward’s classic guitar tone, playing every riff and solo with as much fury and technique as Edward himself, while capturing all of the enthusiasm and flash of Eddie's engaging live personality.

George DuBose as Michael Anthony looks strikingly like Michael and supplies the low-end bass groove, high-end energy, and most importantly the high harmony backing vocals, which is essential in delivering the quintessential signature sound of Van Halen.

Michael Thompson as Alex Van Halen behind his enormous circa 1981 18-piece double-barreled bass drum Ludwig kit delivers the thunderous rhythms and heavy artillery with all the enthusiasm, energy and ear-to-ear grin that Alex brought to Van Halen.

You won't believe your eyes & ears!

You won’t believe your eyes or ears when you come to a FAN HALEN show as you’ll feel like its 1984 all over again! From the look of the band, the choreography, the note-for-note reproduction of the greatest rock songs ever written to the sonic energy of the performance, nothing is overlooked...in other words, while FAN HALEN is on stage they are Van Halen!