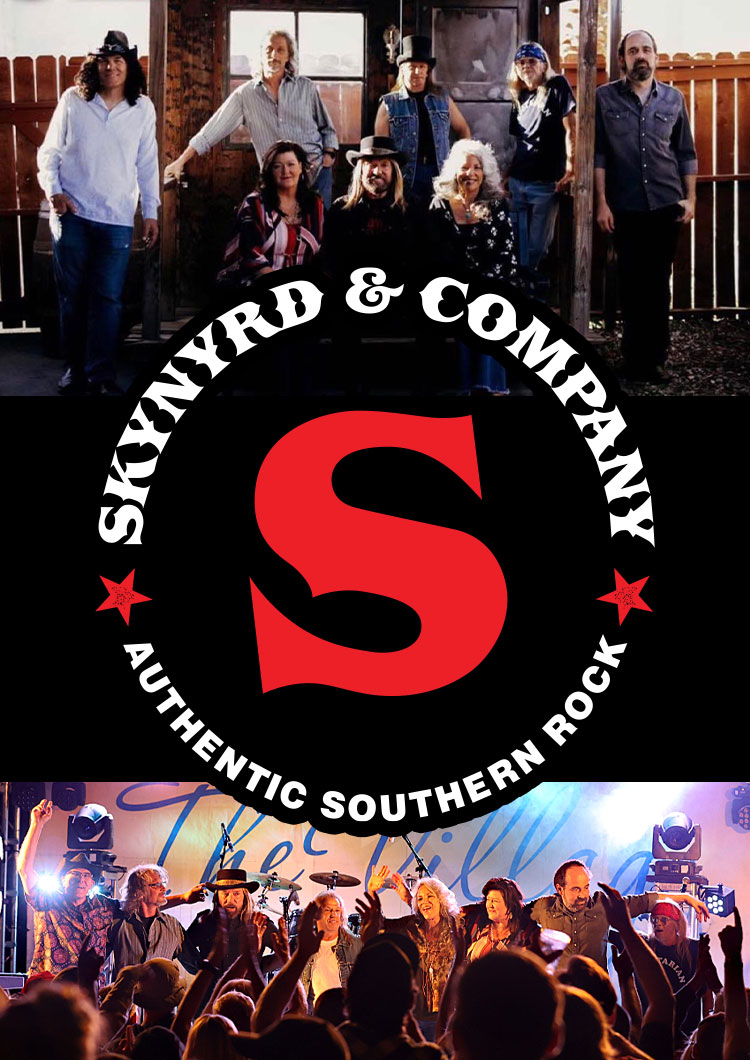 Celebrate the Music of Lynyrd Skynyrd with Skynyrd and Company.

Through accomplished musicianship and high-powered  performances, Skynyrd and Company energizes audiences with a diverse mix of songs from Lynyrd Skynyrd's first five studio albums plus their much-celebrated 1976 live album "One More From the Road."

This Southern California-based group of musicians share a mutual respect and enthusiam for Ronnie Van Zandt's vision to make Lynyrd Skynyrd the greatest Southern Rock band of all time. Skynyrd and Company is dedicated to keeping Ronnie's vision alive with authentic renditions of Skynyrd's classic catalog of songs that include "Gimme Three Steps", "Sweet Home Alabama", and "Free Bird" as well as "Simple Man", "Workin' for MCA", "Saturday Night Special", and "Call Me the Breeze."

Between the years of 1973 and 1977, the classic lineup of Lynyrd Skynyrd defined the Southern Rock genre, leaving a legacy of iconic songs ingrained in the American consciousness. Skynyrd and Company is a group of well-seasoned musicians who came together to accurately replicate this music note for note. With a deep well of talent and a dedication to authentically replicating Lynyrd Skynyrd's iconic sound, Skynyrd and Company has become the premiere Lynyrd Skynyrd tribute band in the American Southwest.

Andrew was born in Buenos Aires, Argentina and moved to Southern California with his family when he was five. Music has been a big part of his life ever since he can remember. He was influenced early on by R&B, the British Invasion, and 70's rock and he especially remembers when Southern Rock first came onto the scene. Being fortunate enough to see Lynyrd Skynyrd live he remembers being influenced by Ronnie's vocal style and how soulful and passionate his voice was with plenty of power.

Celso started playing the guitar at the age of 6 and aside from a prominent solo career with several albums released and awards won, has been playing in Lynyrd Skynyrd tribute bands since the 1990’s. He is accomplished in blues, classic rock and southern rock. His experience ranges from touring to producing to recording.With soulful performances and a vintage guitar sound, he produces precisely on stage the great solos of Lynyrd Skynyrds’ legendary guitarists. Highlights in his career include opening for national acts such as Deep Purple, Canned Heat and B.B. King.

Rich started playing guitar when he was just 10 years old and joined his first band, with his brother on drums, at the age of 12. He has been performing in and around Orange County for decades. Rich's influences are Ace Frehley, Michael Schenker, Randy Rhoads, Eddie Van Halen, and George Lynch.

Born in Albany, Minnesota, Gregory was fortunate to be exposed to music early in his life. His father was a prominent local musician and it was because of him that Greg took an interest in learning to play the guitar. At 19 he decided to leave Minnesota and relocate to Orange County, CA. Over the years he has played in several bands. Musical influences include, but are not limited to, the Hollies, Creedence Clearwater Revival, Black Sabbath, The Who, the Nuge, Molly Hatchet, Metallica and of course Lynyrd Skynyrd.

Blair was born and raised in Decatur, Illinois. At a very early age, he discovered he liked to pound on things. As time went on he purchased a drum set and began to apply that same energy to songs while listening to the radio. After taking lessons for a brief time, he applied the skills he learned to a point where he was able to join his first band. He played in several bands covering many different types of music; Country, Rock, Blues and R&B. He also played in bands that performed original music. Blair realized that if he wanted to take his love for music to the next level he would need to move to a place where the music scene offered more opportunities. So in the late 1980’s he moved to California. Since arriving to the golden state he has played in several different cover bands, but as time has rolled along he decided to take on a real challenge. Playing the music of Lynyrd Skynyrd and making it sound like the original band is no easy task. Artimus Pyle and Bob Burns were very talented drummers in their day. But like all of his challenges, he has taken his part seriously and carried on the mantle of the music of what many would consider the greatest Southern rock band of all time.

Dan was raised in a musical family in suburban Minnesota where as a teenager he played through the piano songbooks of Billy Joel, Elton John, Kansas, Supertramp, the Eagles and many other popular artists of that era. While studying for a music degree at the University of Minnesota he played a 73-key Fender Rhodes suitcase electric piano for an R&B band performing classic R&B hits. After taking a break from the music scene in New York moved to Southern California. After joining Skynyrd & Co. Dan quickly developed an appreciation for Billy Powell’s keyboard contributions to Lynyrd Skynyrd’s music. He enjoys the challenge of playing the extensive range of styles and sounds that is the music of Lynyrd Skynyrd.

eannette's love for music and harmonies began in her early teenage years. She was heavily influenced by folk artists Peter, Paul and Mary, and the rock bands that featured strong vocals such as Fleetwood Mac, Styx and Crosby, Stills and Nash. In the early years she joined a rock band that performed all of the great southern rock bands one of them being Lynyrd Skynyrd. No stranger to studio work, Jae has done session work singing lead and back up vocals and she produced the worship CD "A Place in Time". In addition to singing, Jeannette is also a song writer and has written several songs for a CD.

Born into a musical family, Shaun was surrounded by all types of music from a very early age. Her father was a talented Dixieland musician and her twin brothers played both guitar and bass guitar. In the early years Shaun started an acoustic group called Trilogy with her sister  and a friend. The band performed at local venues, and she is now lead vocalist in a classic rock band. Influenced vocally by Bonnie Raitt and Linda Ronstadt, Shaun is inspired by all kinds of music including the Eagles, Crosby, Stills and Nash and of course the defining southern rock sound of Lynyrd Skynyrd.